Caffeine in Coffee and Tea

Tea and coffee are the most popular drinks on earth besides water, consumed on a daily basis by billions of people worldwide. There is growing research to suggest both popular beverages have health and well-being benefits. While both help to keep us awake and rejuvenated, tea and coffee are vastly difference in their makeup and effects on the body.

White and Green Tea are the clear winners in the health stakes as they are packed full of antioxidants and other beneficial compounds that contribute in an incredibly positive manner to improve our overall health and wellness.

Caffeine is probably the most talked about ingredient in both coffee and tea. It is a stimulant, temporarily warding off drowsiness and restoring alertness. It’s legal and whilst not considered addictive, it’s definitely habit-forming and tolerance to its effects can develop quickly.

A 1995 study suggests that people develop a tolerance to their daily dose of caffeine  (whether its one, or five a day) somewhere between a week and 12 days. And that tolerance is pretty strong. One double-blind study had two participant groups; one group receiving an astronomical 900 milligram caffeine pill per day, the control group received a placebo pill. After 18 days the results showed that the two groups had nearly identical statistics with regards to mood, energy, and alertness. The participants ingesting the equivalent of nine coffees a day had adapted to the huge caffeine hit and showed no heightened signs of alertness, energy or mood. They would feel it, though, when they stopped.

Both coffee and tea contain caffeine. Surprisingly, the fresh leaves of the tea-plant contain the most caffeine, around 5 per cent compared to 1 to 2 per cent for coffee beans. The harvesting and drying techniques, processing, brewing techniques and quantities used per cup dramatically switch these numbers around. To brew a cup of Joe approx. 10mg of coffee is used, compared with 2mg to make a cup of tea.

Tea is a genteel beverage requiring preparation and time to steep. The pace is always slow, calm and tranquil, the beverage soothing and nurturing. On the other hand, coffee culture is fast paced and frantic. Images of people in queues at cafés, impatiently waiting for their coffee fix come to mind. 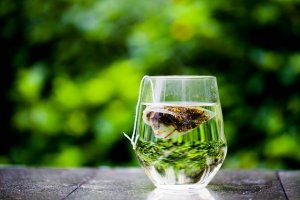 Compounds in Tea and Coffee

There are two types of teas, black and green, both which are derived from the tea-plant Camellia Sinensis. The difference is that black tea leaves are fermented; green are not. Teas of both varieties contain polyphenols; a class of flavonoids. These compounds function as powerful antioxidants that can protect the body from free radical stress.

The most notable of these is quercetin, well-known for its ability to temper allergic reactions and interrupt the oxidation of LDL’s or “bad,” cholesterol. Quercetin can also be very useful in helping to fight and prevent cancer. Cancer rates in Asian countries are the lowest in the world. Is a main contributor to these incredible statistics the Asian population’s large consumption of green tea??

Tea contains tannin, catechin, Vitamin E, Vitamin C, Polyphenols, flavonoids, caffeine and antioxidants including Quercetin, and the wonderful amino acid L-Theanine.  L-Theanine is a unique type of amino acid mainly found in the tea plant and is able to cross the blood-brain barrier. L-Theanine increases the generation of brain waves called Alpha waves, which are associated with alert relaxation. This is perhaps the main reason for the different, milder “buzz” that tea generates compared to coffee. L-Theanine has been studied for its potential ability to reduce mental and physical stress, improve cognition, and boost mood and cognitive performance. L-Theanine may help the body’s immune response to infection by boosting the disease-fighting capacity of gamma delta T Cells.  A four-week study published in 2003 included 11 coffee drinkers and 10 tea drinkers. Participants consumed 600 millilitres of coffee or black tea daily. Blood sample analysis found the production of antibacterial proteins was up to five times higher in the tea drinkers, an indicator of a stronger and more robust immune response.

Another fabulous polyphenols group known as catechins have many wonderful biological functions, including anti-inflammatory, antioxidative, and anticarcinogenic effects.  Black tea also lowers the amount of the stress hormone cortisol.

Coffee contains caffeine, antioxidants, chlorogenic acid, chromium, and diterpenes. Chromium stabilizes blood sugar levels and enhances the action of insulin, a hormone critical to the metabolism and storage of carbohydrate, fat, and protein in the body. Diterpines have antimicrobial and antibacterial actions.

Both coffee and tea contain caffeine but the doses are quite different, as are the effects on the body, and coffee contains almost double the amount or caffeine per regular cup, compared with tea.

The caffeine content in coffee is a central nervous system stimulant and has immediate effects. It excites us, accelerates our heart rate and raises blood pressure. Coffee is also associated with a ‘coffee high’ followed by a low, and arouses a feeling of anxiety, popularly known as “coffee jitters”.

Caffeine in tea is known as theine. When tea steeps with water it forms different bonds to those of caffeine in coffee, resulting in a different effect on our bodies. The stimulating effect of caffeine (theine) in tea usually takes longer to enter the blood stream than coffee, slowly releasing theine in the blood over a 6 to 8 hour period. The effects of theine in tea on the Central nervous system and cardiovascular system are mellower on the system as a whole. The caffeine content in tea helps to increase concentration levels and a relaxed sense of alertness.

Instead of a quick fix with coffee, tea is the healthier and longer lasting fix. Research shows tea sharpens the mind, increases concentration, and enhances relaxation without the over stimulating effects akin to drinking a cup of coffee.

Coffee is bitter and extremely acidic. Many coffee aficionados explain that high acidity in coffee give it its brightness, its liveliness. But it comes at a cost. Coupled with chlorogenic, mallic, citric, caffetic and quinic acids, the high acid content of coffee is a big contributor to acid reflux, GERD, heartburn and indigestion.

On the other hand the caffeine derivative ‘Theine’, present in Tea, is much less acidic and gentler on the digestive system.

Research has also indicated that tea is good for you heart since it decreases serum cholesterol, triglycerides and fatty acids. Tea is also high in antioxidants, which have protective abilities towards free radical damage. Tea comprises some ingredients that provide immense relief from inflammatory disorders and arthritis. It also reduces blood clotting.

Coffee:The strongest evidence for coffee’s health benefits centre around diabetes. Drinking at least three cups of coffee per day has been linked to a lower risk of developing Type 2 Diabetes. Coffee contains the antioxidant chlorogenic acid, which has been shown to lessen inflammation in the body, reduce glucose (sugar) absorption and improve how the body uses insulin, the hormone that lowers blood glucose.

Coffee intake also increases neurotransmitters including serotonin (the happy hormone), dopamine, and GABA which increases alertness and decreases fatigue. Coffee lowers the risk of cardiovascular disease, reduces cognitive decline associated with aging and has shown to reduce the effects of Alzheimer’s. Coffee also contains magnesium and Chromium, minerals linked to blood sugar regulation.  Caffeine may improve symptoms of Parkinson’s disease although researchers are unsure of the causes, possibly the increase in dopamine release?

Caffeine is useful in alleviating asthma by relaxing the airways in the bronchial tubes of the lungs. (The stimulant was used for precisely that purpose in Europe in the 1850s.)  Coffee consumption also aids in combating drowsiness, temporarily boosting athletic performance, eases congestion due to cold and flu, and enhances the pain-relieving effects of aspirin.

Coffee constricts the blood vessels in the brain and is sometimes used to treat migraines. If however coffee is withdrawn from the system, headaches result from sudden brain blood vessel dilation as opposed to constriction caused by regular caffeine consumption.

I liken the effects of coffee and tea to that of the tortoise and the hare. Tea creates a slow yet steady feeling of relaxed alertness. Coffee gives a wonderful instant energy boost, but is short-lived (a couple of hours?) and not sustaining. The need for more and more coffee increases as tolerance is reached leaving the participant wanting more but rarely satisfied for long. Due to the L-theanine and its effect on alpha waves in the brain, tea may be a better choice than coffee for those who need to concentrate for long periods of time.I personally feel great when I drink green tea. It gives me a lovely ‘clean’ feeling (must be all the antioxidants?) I feel relaxed yet energized, focused and alert. The best thing is I don’t get the jitters or anxiety that coffee tends to give me.

My conclusion is that Tea, especially Green Tea, offers greater health advantages in the long-term over Coffee. I don’t regularly drink coffee anymore and have switched to green tea especially when working for long hours in front of the computer. I save coffee for rare occasions and only in small doses, just because it tastes so deliciously, seductively good. :)

Suzie Taylor is passionate about health and wellness and likes to practise what she preaches. She recently completing a 30 cleanse program to experience for herself the effects of cutting out coffee on her own system. She is surprised at how happy, less stressed and more relaxed she feels on a daily basis. Her overall improved wellness cannot solely be contributed to the elimination of coffee but it definitely played a major role.

Suzie also owns and runs a corporate massage company Australia Wide, her outstanding team of therapists providing seated massage for over 20 years. 2 hands therapists often see clients with neck and shoulder pain, suffer from regular headaches and have so much tension; their rhomboids and shoulders are more like concrete than muscle tissue. Thankfully the 2 hands therapists also witnesses amazing results with regular seated massage treatments.  Reap the rewards of ongoing seated massage and book a corporate massage treatment for your team today,  https://www.2handsmassage.com.au