Two Hands Corporate Massage treatments focus on muscles of the back, neck and shoulders. Employees with computer based roles can regularly experience pain and stiffness in these areas. Shiatsu, trigger point, and remedial massage techniques used by our fully qualified therapists can release stress and tension, producing relaxed yet alert participants.

Personnel remain fully clothed and receive their 15 minute seated massage on our ergonomic chairs. The sessions are long enough to induce the relaxation response, diminish pain, tension and stress. However they are also short and succinct, a perfect mini break. 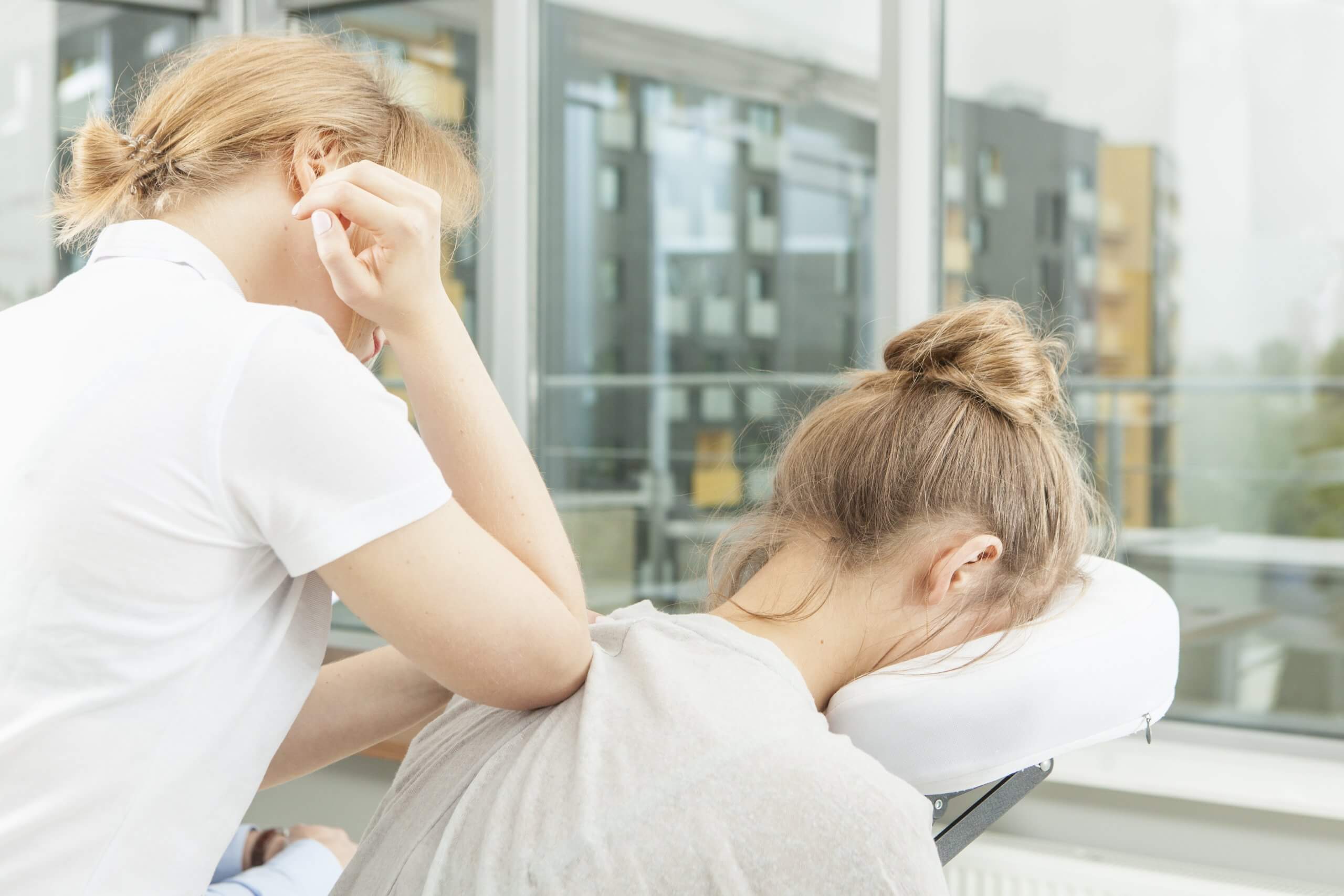 Reward Your Most Valuable Asset – Employees. 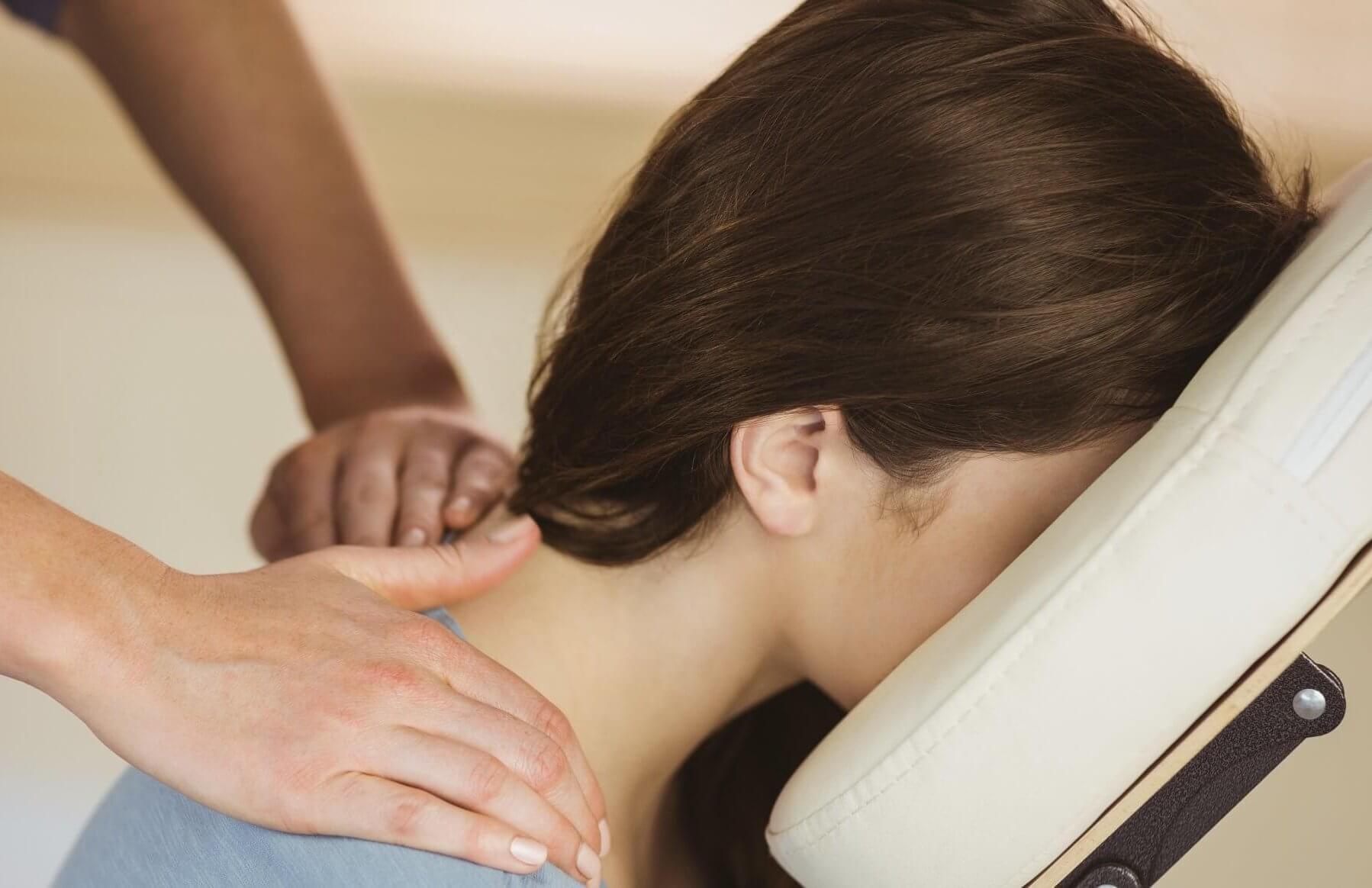 Regular breaks throughout the day improve productivity and motivation rather than hinder work progress. Refreshed, stress free staff are happier and perform better. There is a reason big business like Google and Microsoft invest thousands on corporate wellness programs. The results show time and again the rewards far outweigh the cost. See more statistics here

Enquire now about a corporate massage program for you and your team today.

There Is A Wealth Of Emerging Evidence Indicating That Corporate  Wellbeing Programs Provide An Excellent Return On Investment. 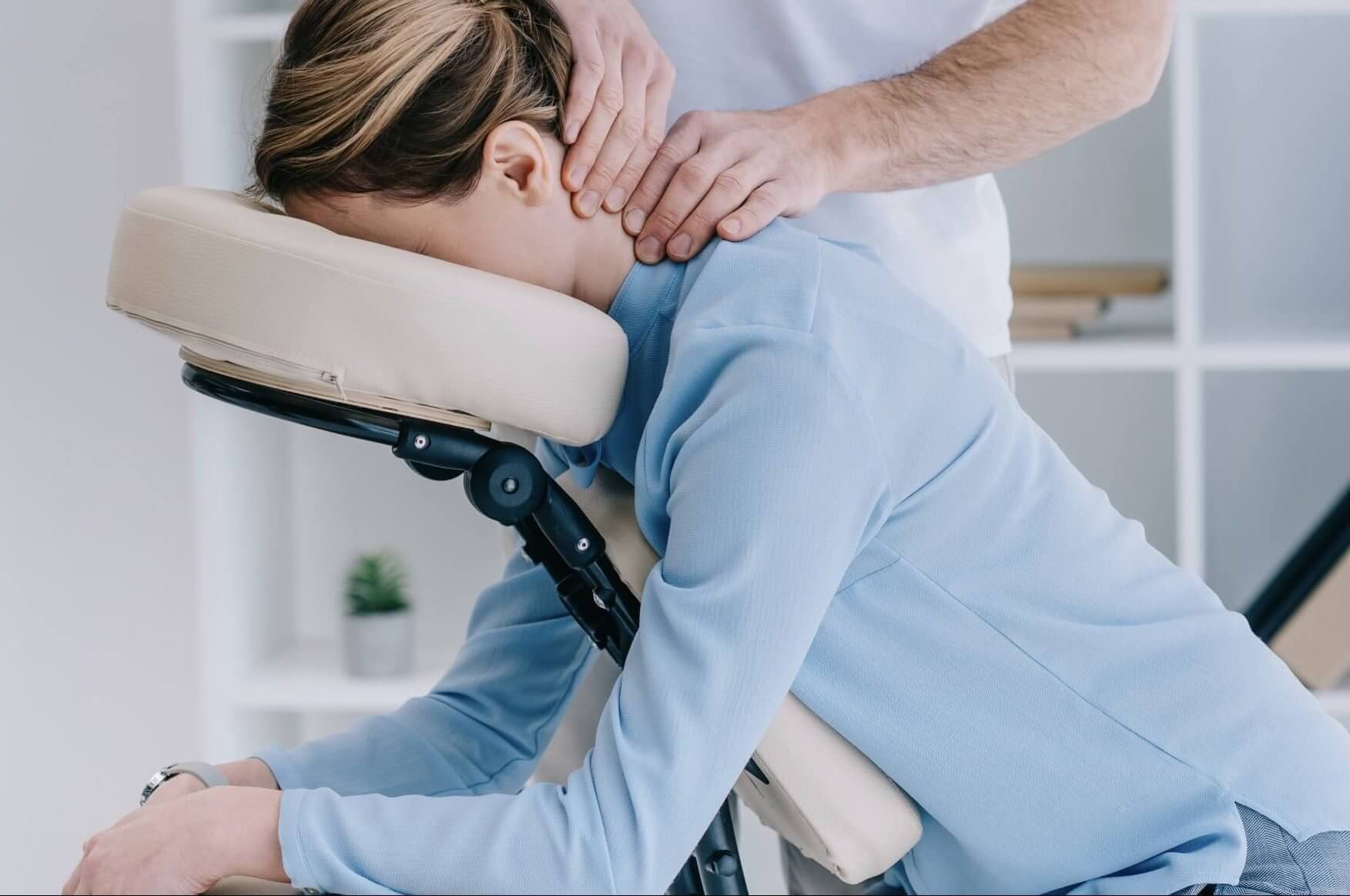 BUPA Article ‘Workplace Wellness Ideas reposted by ‘The Ergonomic Physio, that we featured in (Australia, 2017)… 2 Hands Corporate Massage – as the name suggests, this team specialise in corporate massage. The majority of workplace injuries in the white collar sector are overuse injuries. Massage is a great complementary service to workplace ergonomics, as it provides an opportunity to relax the muscles and body parts that accumulate physical stress throughout the working year. And it feels great too, which is bound to improve staff productivity and happiness!

2016 BUPA article Developing Healthier Bodies  “Workplace massage is a simple way to help make a positive difference within your team. The short appointment times allow for large numbers of employees to participate with minimal disruption to their working day.” 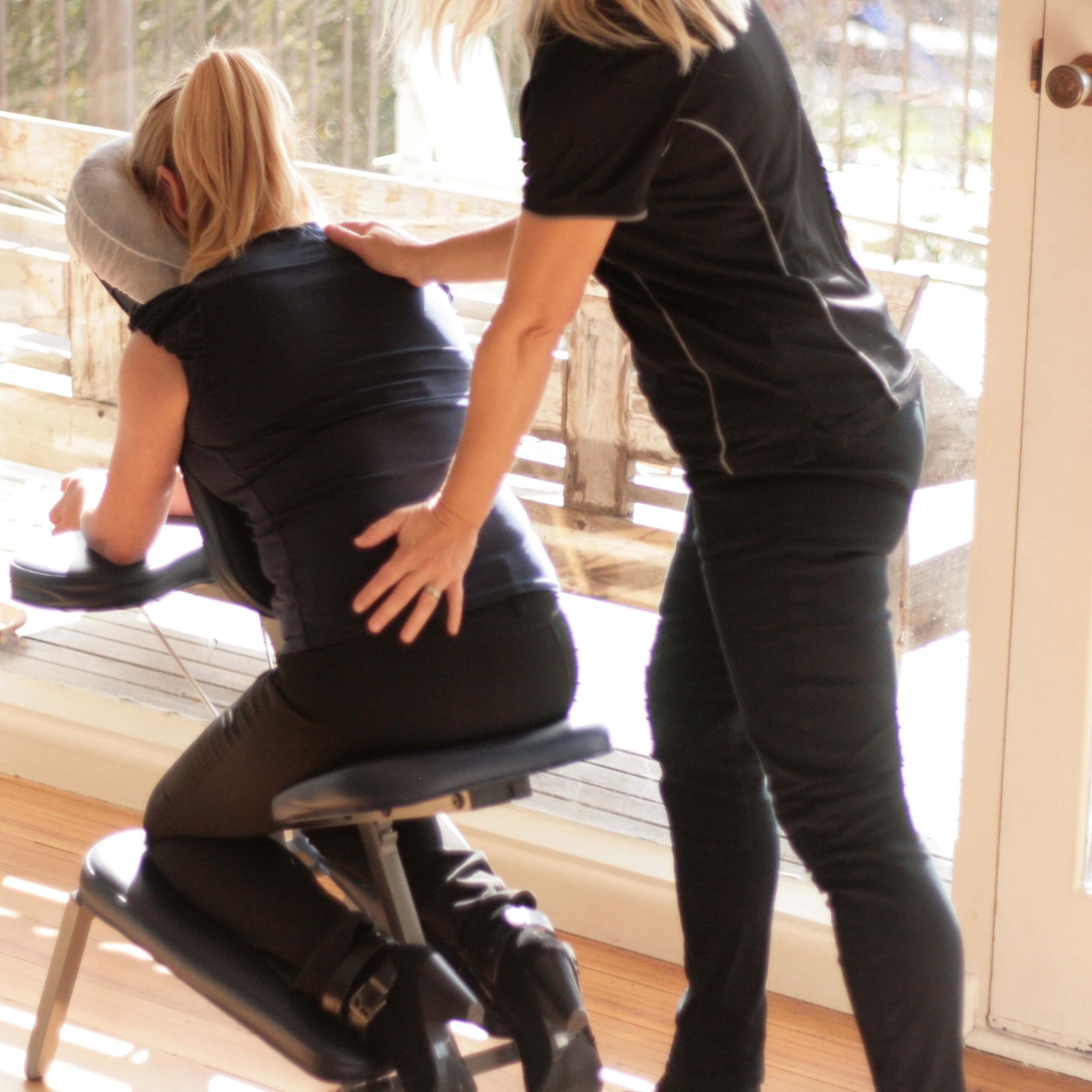 Victoria University Thesis (Melbourne 2013) ‘Improving workplace productivity and corporate culture : perceptions and experiences of the effects of workplace massage. “The importance of attracting and retaining quality staff should not be understated. Achieving low staff turnover, minimal absenteeism, and maximum productivity are among employers’ greatest challenges…… the implementation of intervention strategies such as workplace massage provides employers with the opportunity to make the workplace more engaging.

Since the 1980s, many employers have increasingly been providing workplace massage programs to their staff as one initiative to redress this trend. Clearly, one of the underlying aims for employers in providing such facilities is to prevent and manage work-related injuries and stress.  “Improving workplace productivity and corporate culture” Deborah Lane, Victoria University 2015

2016 Forbes article ‘5 Reasons Executives Should Schedule A Massage Today’. some of the compelling reasons include; reducing pain and stress, improving productivity, sparking creativity and enhancing sleep. “When you get a massage, it is about you, People need that. We need to be nurtured.”

Australian Government Comcare Report; Benefits to business: the evidence for investing in worker health and wellbeing 2011.

Corporate massage has been promoted as an effective intervention for stress management and for reducing physical tension, and there has been many claims in favour of such programs, including that it relieves stress and tension (Bost & Wallis, 2006), increases productivity (Waite, 2006), improves morale (Hirschhorn, 1990), lowers health care costs (Williams, 2011), and reduces absenteeism (Hawkins, 2011)

Global research has found that when employee health and wellness is managed well the percentage of engaged employees increases from 7% to 55%. This research also found self-reported creativity and innovation increases from 20% to 72% Right Management 2009, Wellness and Productivity Management: A New Approach to Increasing Performance, 15 July 2011.http://www.rightmanagement.com.au/thought-leadership/e-newsletter/wellness-and-productivity-management.pdf

The significant economic burden that work-related stress imposes upon the Australian economy appears to be growing steadily. WorkSafe Victoria (2011) reported that “stress is the second most common cause of workplace compensation claims in Australia, second to manual handling” 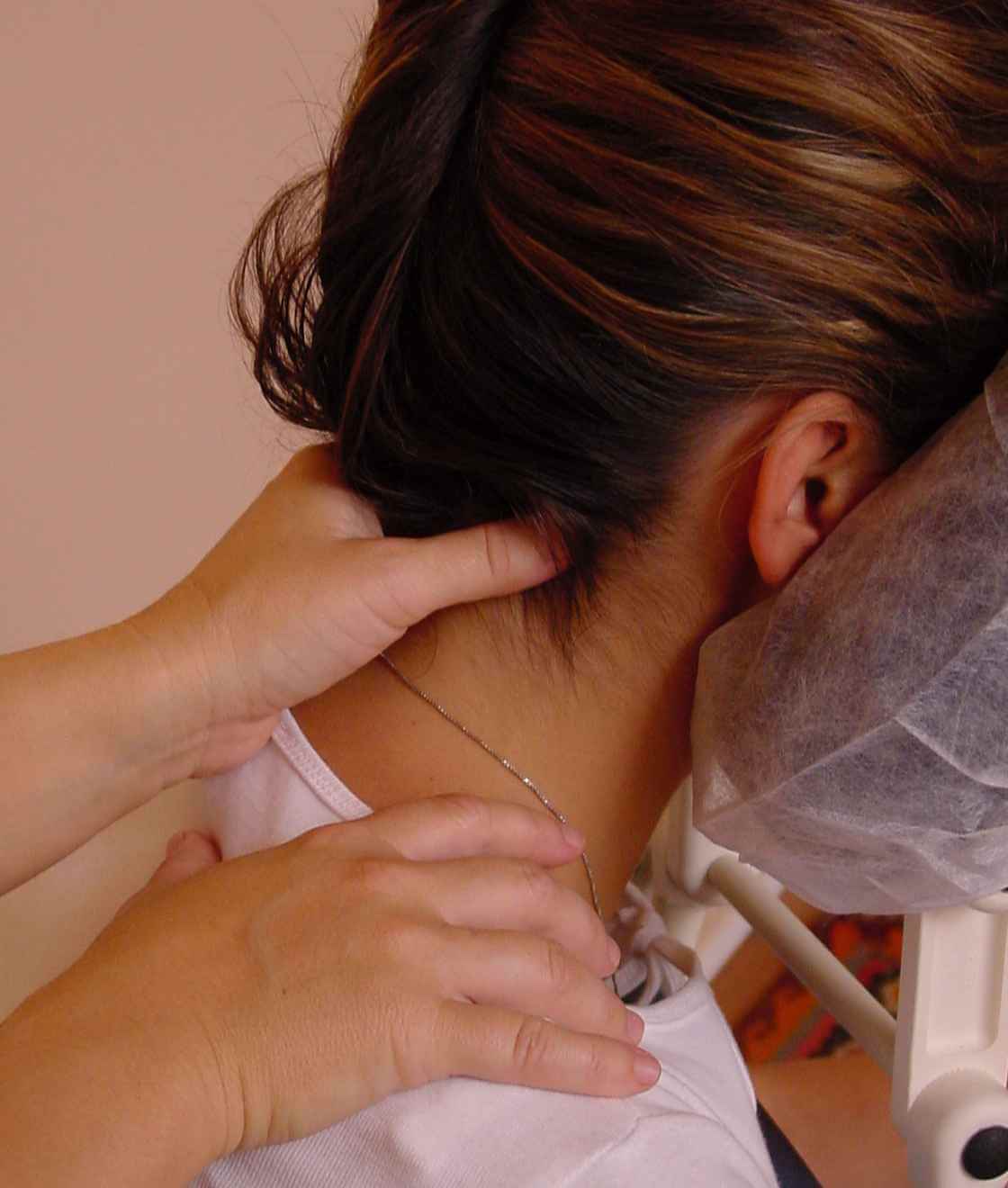 Research on the relationship between health and productivity finds healthy workers are more productive at work than unhealthy workers. Mills, P 2005, The Vielife/IHPM Health and Performance Research Study, 1 July 2011. http://www.healthproject.com.au/content/ROI_CORPORATE_HEALTH.pdf

Chronic diseases; which include arthritis, musculoskeletal disease, depression and anxiety, cardiovascular disease, cancer, diabetes and hypertension, is considered to be largely preventable, and is identified as the prime cause of lost work time in the working-age population.World Economic Forum 2008, Working Towards Wellness:The Business Rationale, 1 July 2011,http://www.weforum.org/pdf/Wellness/report.pdf

Health and wellbeing programs help to attract quality employees who value personal health and assist in retaining existing staff members. Roll out of programs has the potential to improve workplace culture as well as workplace health by developing a closer congruence between employer and employee values—increasing the satisfaction level of employees. Crowther, I, Thwaites, M and Zhou, J 2004, Measuring the benefits of corporate health & wellbeing initiatives, 25 July 2011.

When employees at work are not fully functioning due to illness or a medical condition, it is estimated the cost to the employer is between three and four times that of absenteeism. Australian Government Comcare Report. Benefits to business: the evidence for investing in worker health and wellbeing 2011 http://www.comcare.gov.au/__data/assets/pdf_file/0006/99303/01410_WH_and_S_Benefits_to_business_v1.pdf

In 2005-06 the cost of presenteeism to the Australian economy was estimated to be 25.7 billion
“Sick at work” Medibank private study. 2007.

Stress at work is costing the Australian economy $14.81 Billion a year.  Stress related Presenteeism and absenteeism are directly costing Australian Businesses $10.1 Billion each year. 3.2 days per worker are lost each year due to workplace stress
“The Cost of Workplace Stress in Australia” Medibank private Workplace Health Report 2008.